Today is our last show of election coverage bringing in Princess Blanding, candidate for Governor and Marrena Davis, speaking on behalf of the Paul Davis campaign. 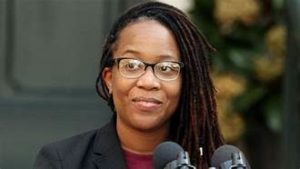 Princess Blanding, an educator for over 13 years here in the Commonwealth and a grassroots activist, has a history of fighting to elevate the voices and concerns of every day, working-class Virginians and for increased accountability from our local and state elected officials to address the inequities in our Black and most marginalized communities.

As a single LGBTQIA+ mother based in the Middle Peninsula with roots in the rural working class, Princess’s connection to marginalized communities runs deep. Our campaign will prioritize the growing challenges of hard-working families in all regions of Virginia.

A veteran educator and community activist, Princess’s expertise has been in-demand in the Virginia General Assembly. In 2020, Princess worked closely with prominent members of the Virginia State Senate and House of Delegates in proposing legislation that puts community care and safety first.

Princess’s fearless advocacy has, and always will, prioritize the needs of everyday people.

Marrena Davis with a background in nursing and graduate of Tidewater Community college then transferred and earned her degree in psychology from Old Dominon University. Marrena is married to Paul Davis. Both born in Norfolk Virginia. They met through friends and later discovered their grandmothers we’re neighbors and best friends 45 years! Marrena’s grandparents were major business owners in the Hampton roads . Tidewater Steel company supplying navy steel to the navy and other governmental agencies. Also she shadowed  her step grandfather and grandmother that owned Bayview plaza pharmacy for 33 years. Marrena is involved in volunteering and building individuals future. Especially the children as she realizes they will shape the future of this country. A young constitutional advocate and advocate for young children growing up in different living situations such as foster care and guardianships like she did growing up. She is looking into a  law protecting Virginia heirs see their inheritance as she is fighting for her rights as an heiress in Virginia today. Marrena loves athletics and soccer is her favorite !